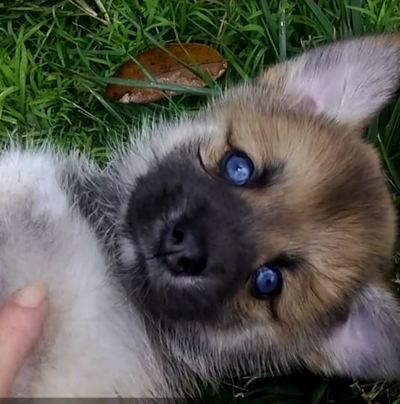 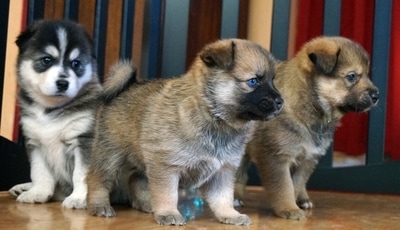 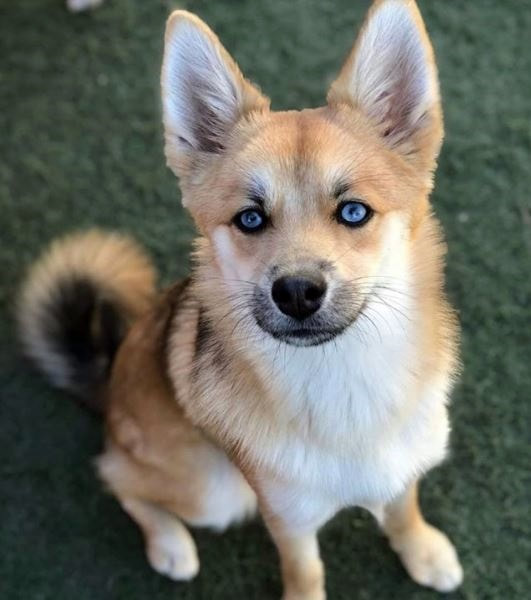 FIRST POTTY OF THE MORNING:
​
Your puppy wakes up between 6:30 and 7:30 AM.
🐾Take them right out of cage (but don’t talk to them).
🐾Take them to the spot you would like them to go potty.
🐾Put them on grass area- back and forth saying to them “Hurry, go potty”.
🐾As soon as they squat, say “Good potty outside!”
🐾Then let them run around for a little while.
​
FEEDING TIME:
When your puppy comes back into the house, it is feeding time. Food is put down for 15 minutes. Whatever they do not eat gets picked up.  About 15 to 30 minutes afterward, they will need to go outside to go poopy.

Puppy will need to go outside after the following: 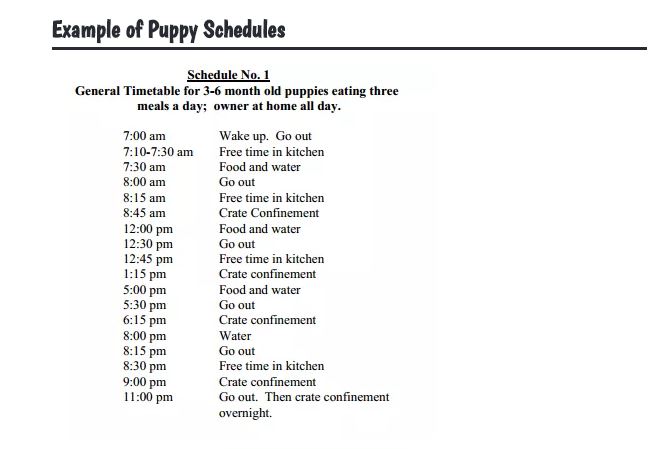 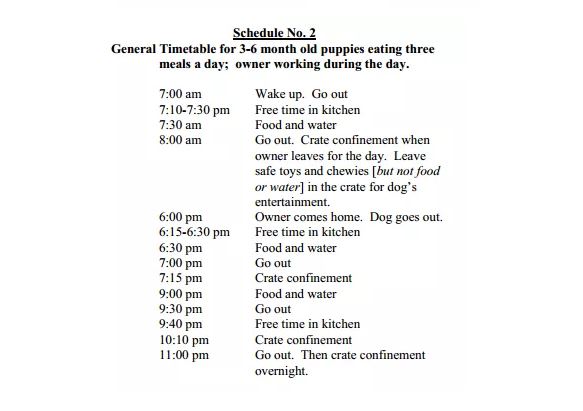 The signs of having to go potty are sniffing and circling around. When you CANNOT be with your puppy, they need to go into the crate or playpen.

Puppy can choke on bones, stuffed toys, beds and blankets! So be careful about what you put in their enclosure with them.

If puppy still cries in the crate, then you can tap the top of the crate and again in a low voice say
“NO – QUIET!”

Puppy Separation and Confinement How to stop the Whining, Crying and Howling!
​Puppies will whine and cry when separated from their owners and left alone, especially for the first time. The puppy is afraid he is being abandoned by his pack and is sounding the alarm so that he can be rescued. This is most common when a puppy is confined to a small space or to a crate. This is perfectly normal dog behavior. But sometimes the sounds are so hideous and loud it scares us and we fear for the puppy’s well-being. Every puppy I have put in a crate for the first time has screamed to high heaven! So what should you do?

Be pro-active in training your puppy to accept isolation and privacy. Accustom your puppy to being left by herself, even if you are home. This will prevent separation anxiety and all the problems that accompany it.Start off by putting the puppy in the confined area (crate, exercise pen) for a very short period of time. If he starts whining or crying when you leave, don’t rush back to let him out or reassure him. If you do, the puppy will soon learn that he can control you with his whining. However, whining, crying and barking continues then he probably is not yet comfortable in his confinement area. Spend a little more time with him there. Then when you leave, if he continues whining or howling, give him a loud and stern ‘NO!’ After he has been quiet for a few moments, return and praise him lavishly. Practice leaving and returning several times so he becomes accustomed to your departures and realizes that you are not abandoning him forever. He will see that you will return and there’s nothing to worry about. Practice leaving him for longer and longer periods of time.
In many cases, putting a treat or toy in the crate or pen with the puppy before closing the door will help condition the puppy that it’s a fun place to be.
Puppy Whining and Crying Do’s-After being confined to a crate, or pen for some time, always give your puppy the benefit of the doubt. When she begins whining, wait for a short pause in the whining, then immediately take her to her toilet area.
-Make sure your puppy is comfortable. Is your puppy hungry, thirsty, too hot or cold?
-When you know that all your puppy’s physical needs are met and you have taken the time to accustom her to isolation, then teach her that whining is unacceptable.
Puppy Whining and Crying Don’ts-Do not give in and reward your puppy for whining.
-Do not hesitate to appropriately reprimand unnecessary whining.
-Do not let your puppy feel abandoned.
-Do not let your puppy soil her crate.
Day-to-Day WhiningIt’s important to understand that sometimes your puppy will whine and vocalize for no apparent reason – from our point of view! We can only wonder what’s up with our dog. However, most times our puppy whines for a good reason. My puppy whines at the front room window because she is looking for her playmate to come over to our house. This is acceptable, for sure, but within limits. If she whines excessively, she is told to stop. My puppy whines and barks if her treat infested “Have-A-Ball” toy gets stuck in a place where she can’t access it – OK – I’m outa my chair to help her get it out – not a problem – I Love My Puppy! Before you reprimand your puppy for whining, barking and howling, try to get a handle on why! Maybe you can fix it!
Excessive or Demand Whining and BarkingThe reason excessive whining continues is because the dog has learned that whining, crying or barking gets whatever he wants – attention, food, affection. Often what starts out as a demand whining soon becomes an unconscious whining habit..
If your dog is whining or howling when you are at home, either for attention or just out of habit, the first step in stopping this is to provide your dog with daily routines of play, exercise and training. Often these special times of undivided attention will stop the dog from whining the rest of the day. Secondly, pay attention to your dog only when he is quiet. Ignore him whenever he begins demanding your attention by whining. Each time you give in to your dog’s whining demands, you are training him to continue whining. If you want a few moments of peace, you can teach the dog to be quiet on request. Gently ask your dog to please ‘Stop Whining.’ If he ignores you and continues whining, immediately shout a very loud, ‘STOP WHINING!’. After a few repetitions, the dog will get the idea and obey the first gentle request of ‘Stop Whining,’ rather than get scolded.
Health Considerations and WhiningUnusual whining or whining that starts suddenly when it never existed before may be your dog’s way of telling you that something is wrong. See your veterinarian right away to be sure no health problems exist.
SOURCE: PERFECTPAWS.COM